As normally happens in my life, the best laid plans…often go awry. My intent in October of 2018 was to post 4 blogs, one a week, for Down Syndrome Awareness month. I got one done. With World Down Syndrome Day coming up, I am revisiting this thought and will post the remaining facts now! Better late than never! The important thing is to get the information out into the world. 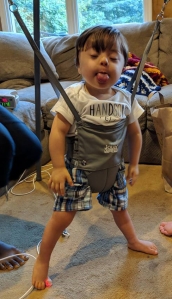 Some people may think that the “Down” part of Down syndrome has something to do with the diagnosis itself and what people who have it are like. But it is anything but! It is simply named after John Langdon Down. Believe me, there’s nothing down about it!!

Brighton got his feeding tube because as an infant he would aspirate when taking a bottle and was also not able to finish bottles that were given to him. It was the only way we could get enough food into him every day. When he came home from the NICU, his reflux was bad for a while so we had to stop bottle feeding for a while as well, so he never fully learned to eat by mouth. It’s a slow process, but we are determined to get to the finish line, one bite at a time! 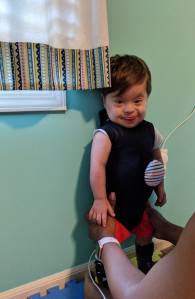 Brighton is not suffering. He’s loving life! He rocks his extra chromosome and has so much fun, love and laughs! He’ll brighten anyone’s day! 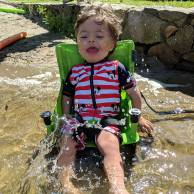 Brighton has been off his oxygen now both night and day since the beginning of September. We also finally stopped using the pulse ox monitor, which he would wear pretty much 24/7. So now he’s wire-free! It’s amazing to see that precious face without anything taped to it! It took almost 2 years but he’s doing great!! 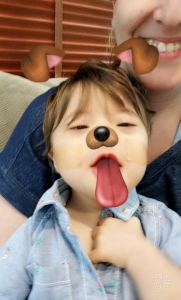 Please remember this. And Just. Don’t. Say. It.

Brighton isn’t Down syndrome. It’s something he has. There’s so much more to him! Our kids define themselves.

He’s so anxious to be moving around independently, so we’re working really hard to reach that goal! Brighton started sitting on his own in December of 2018 and we are working on crawling! We hope to see him crawling all over this house very soon!!